State of the Voice Chat feature

This feature is reserved for partners who specifically request it at the moment. It’s still in active development and still has to face some challenges before it can be released into the wild (mainly to do with hosting, since voice servers are quite resource hungry which isn’t financially feasible on the scale that OpenAudioMc is currently operating. A public release would likely be in the form of a paid plan, but its too early in development to say anything decisive about that.)

to toggle their microphone mute from in-game.

OpenAudioMc has native support for BanManager, meaning that Muted users aren’t able to use the voicechat at all (they can’t listen or talk until their mute expires). You can implement custom moderation rules through the Java Api

Players will be asked to enable voice chat when opening the client if voicechat is supported on the current server. They’ll get a short instructional message explaining what voicechat is (explaining the configured radius, and that they can always opt-out again if they want to)

The tutorial will disappear if they reject the invite, or get replaced with a small personal dashboard where they can mute their microphone, change their audio type (from a dynamic surround system to normal Discord-like volumes). The empty box on the left shows who are in voice range (allowing the user to see who’s listening to them and to mute other individual users) 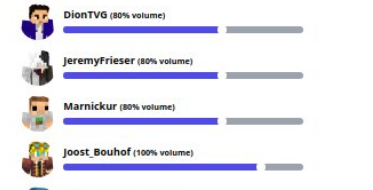